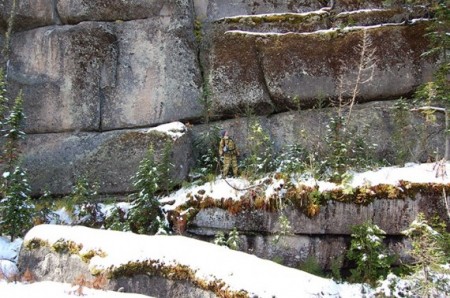 An incredible discovery that was recently made in Russia threatens to shatter conventional theories about the history of the planet.  On Mount Shoria in southern Siberia, researchers have found an absolutely massive wall of granite stones.  Some of these gigantic granite stones are estimated to weigh more than 3,000 tons, and as you will see below, many of them were cut “with flat surfaces, right angles, and sharp corners”.  Nothing of this magnitude has ever been discovered before.  The largest stone found at the megalithic ruins at Baalbek, Lebanon is less than 1,500 tons.  So how in the world did someone cut 3,000 ton granite stones with extreme precision, transport them up the side of a mountain and stack them 40 meters high?  According to the commonly accepted version of history, it would be impossible for ancient humans with very limited technology to accomplish such a thing.  Could it be possible that there is much more to the history of this planet than we are being taught?

For years, historians and archaeologists have absolutely marveled at the incredibly huge stones found at Baalbek.  But some of these stones in Russia are reportedly more than twice the size.  Needless to say, a lot of people are getting very excited about this discovery.