The History Of The House Of Rothschild 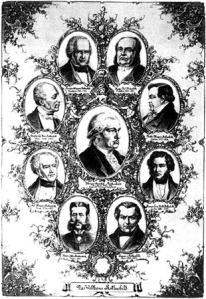 The Rothschilds have been in control of the world for a very long time, their tentacles reaching into many aspects of our daily lives, as is documented in the following timeline. However, before you jump to the timeline, please read this invaluable introduction which will tell you who the Rothschilds are as oppose to who they claim to be. The Rothschilds claim that they are Jewish, when in fact they are Khazars. They are from a country called Khazaria, which occupied the land locked between the Black Sea and the Caspian Sea which is now predominantly occupied by Georgia. The reason the Rothschilds claim to be Jewish is that the Khazars under the instruction of the King, converted to the Jewish faith in 740 A.D., but of course that did not include converting their Asiatic Mongolian genes to the genes of the Jewish people.

You will find that approximately 90% of people in the world today who call themselves Jews are actually Khazars, or as they like to be known, Ashkenazi Jews. These people knowingly lie to the world with their claims that the land of Israel is theirs by birthright, when in actual fact their real homeland is over 800 miles away in Georgia.

So, next time you hear an Israeli Prime Minister bleating about the so- called persecution of the Jews, consider this, every Prime Minister of Israel has been an Ashkenazi Jew. Therefore when all these Prime Ministers have curried favour with the West for their re-establishment of a Jewish homeland, they have knowingly and deliberately lied to you, as they were never from that region, and they well know it, because it is they who call themselves Ashkenazi Jews. END_OF_DOCUMENT_TOKEN_TO_BE_REPLACED