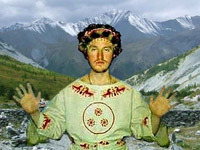 Note from the Editor: In the scheme of things, I found this article quite interesting. These certainly are Sirian traits all of them, just like I have told in my papers. Wes.

State prosecutor Vera Vasilkova told Interfax that defense had not finished questioning Rudnev. According to Vasilkova, the defendant confirms that he is present in the photo and video materials of the case, although he does not recognize his participation in the alleged crimes.

“As for the videos and photos of those meetings that the religious organization conducted, Rudnev said that they were just training classes,” said Vasilkova. She also said that the next hearing is scheduled for January 21st.

Earlier, lawyer Alexander Nizhinsky told the agency that Rudnev did not recognize his participation in the crimes; defense will insist on his full acquittal. He also expressed confidence that the sentencing would occur in January 2013.

During the hearings held on 26 December last year, Rudnev’s detention was extended till 27 March, 2013. The lawyer also expressed confidence that the sentencing will occur in January 2013.

Earlier, the court finished questioning witnesses on the case of Ashram Shambala sect. In total, the lawyer said, the court heard testimonies from about 30 victims from different regions of Russia and 50 witnesses. The phase of the trial continued for about 18 months. The trial of Konstantin Rudnev started last year and is held in the form of a closed session.

The defendant was charged under Article 131 (rape), Article 132 (sexual assault), Article 228.1 (illegal sale of narcotics) and Part 1 of Article 239 (organized infringement upon the rights and personas of citizens).

The activity of religious association Ashram Shambala, which was operating in the Novosibirsk region of Russia, was stopped in October 2010.

According to police, the organization led by Rudnev was established over 20 years ago. The ideology of the sect is based on Oriental occult practices. Its members, mostly young people between 17 and 30 years of age, would be deprived of their common circle of friends and lifestyle. They would be subjected to psychological and emotional pressure. As a result, young people would often leave their homes, terminate relationships with friends and family and shift from conventional norms of morality and ethics to those accepted among the participants of Ashram Shambala.